UNIGIS UK celebrates its 25th anniversary of the first intake in Manchester on October 22-24.  During this meeting the UNIGIS 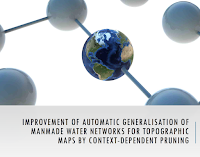 This award, initiated in 2008, is presented to the student, or students, nominated by their UNIGIS sites for submitting the best MSc thesis (or paper) during the academic year. This year the competition was very tight with nine excellent high quality MSc theses being considered by the review panel. In the end the panel decided to grant three award winning theses.

The joint winners are of the Academic Excellence Prize for 2015 are Vincent van Altena (UNIGIS Amsterdam) and Rachel Antcliffe (UNIGIS UK). Adrianna Valenti (UNIGIS USA) received the third place award. The Review Panel would like to congratulate these individuals and the other candidates for their high quality of work. The two first prize winners are rewarded with a prize of € 800 each. The runner up prize winner gets € 200. All winners also receive a free ticket to the annual GI Forum, held in July in Salzburg.

Winning topics:
The actual awards will be handed over to the winners during the GI Forum in July 2016.